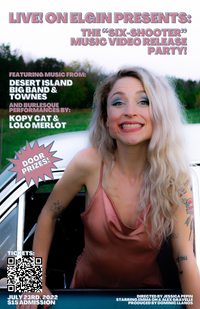 Come one, come all! To the Six-Shooter Music Video Release Party, featuring music from The Desert Island Big Band and Townes, as well as burlesque performances from Lolo Merlot and Kopy Cat! There will be a door prize of merch from the venue and both musical acts, and all attendees are highly encouraged to dress up as wild or as well as they want.

Kopy Cat: Kopy Cat has been performing burlesque since 2017 when she won Burlesque Idol at the Ottawa International Burlesque Festival. This Mohawk beauty has taken North America by storm performing her upbeat, high-energy style all over Ontario, Quebec and the United States. Kopy Cat is one of the producers of Ottawa’s only monthly burlesque show, Basement Burlesque. She’s the Original, Kopy Cat!

Townes: If you sat down next to Matt Radich at a bar, you may be surprised to find out he is one of Nicolas Cage’s only genuine fans, a cynic with a dry wit, and also a recording artist under the name of Townes. If asked to describe his music, he might laugh and say “it’s just bad”, but that would be unsurprising as one could find a lot more self-deprecating humour within his music. With four EP releases to his name and several new singles, Townes has found an addictive middle point between indie-rock and gloomy pop. Combining stellar songwriting and nostalgic late-00’s production, he draws on influences from Beck , Wolf Parade, and Diamond Rings.

Lolo Merlot: Lolo Merlot; smooth and full bodied, sure to make you blush. She studies gemstones by day and shows them off at night. She is an instructor at the Ottawa burlesque academy. She produces and hosts THE monthly basement burlesque show every third Saturday of the month at swizzles bar.